Many people are looking to become self-sufficient.

For many of us, we want dairy products. The two main choices are 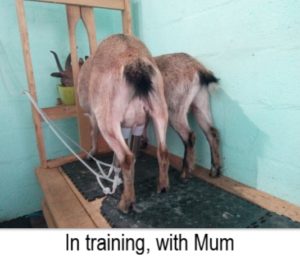 between cows or goats.

Cows are big. Cows eat a lot. Cows give a lot of milk.

Cows are also destructive of the ground where they spend much of their time, purely because of their size.

Goats are much easier to handle as they are physically much smaller. They eat comparably less. They don’t overwhelm you with milk. They are less destructive to their surroundings as they are that much smaller & lighter.

I will focus on milking goats as that is what we have on our farm. Much of the same holds true for cattle – just think much bigger!

To have milk, goats need to have babies. The natural order is for them to kid about once a year. Some are capable of kidding twice a year but that is generally unfair on them as their body doesn’t have time to recuperate its’ strength.

Goats are pregnant for 150 days – about 5 months. They should be “dried up” at least two months before they kid so that their body puts its energy into the growing kid & not into milk production. They can then be milked for about ten months before needing to be dried up again before they kid.

This is a general rule of thumb. Many goats can be milked for a longer period, but they will give progressively less milk. Some goats dry themselves up within months of having kidded. Not great in a milking goat!

For a household looking to have a continual supply of milk throughout the year, it makes sense to have at least two milking goats. You can then plan to have them, kid, at different times of the year which means that you will have a year-round milk supply. Sometimes a bit more & sometimes a bit less. Excess can be made into cheese & many types of cheese store well or can be frozen.

It is really simple to milk by hand. It’s a good idea to have a milking 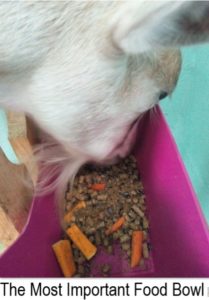 stand to secure the does head. Most goats will stand to be milked quite happily, while there is food in their bowl!

A milking machine comes into its own if you are milking more goats than your hands can cope with & if there is no one to act as a backup milker if you injure yourself! It doesn’t really take any shorter, but your hands will thank you!

Be sure that you get goats that will give the right milk for your needs. Some have higher butter-fat content & others give more milk. There is a balance between the two. I will talk more about the different milking goat breeds in another blog.

Milking goats is a daily commitment.

It isn’t a chore you can do when you feel like it. It needs to happen at 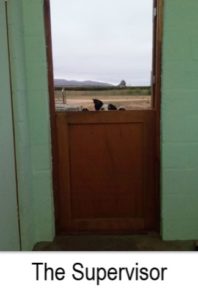 more or less the same time each and EVERY day! You can choose to milk once, twice or even three times a day. You won’t get 3 times the milk but the more you milk the more you get.

I choose to milk once a day, in the morning. Then the herd goes out to play for the day – they free-range – and I can have a few hours to do other things before the evening routine & locking them up for the night.

There is no right way.

Only the way that works best for you & your goats.

If you are getting goats of your own or if you are visiting goats, you want to be friends with them!

The best thing to do is take them food. Then quietly sit down close to them and put the food down next to you. Wait patiently. Keep chatting to them. The sound of your voice helps them get to know you.

They will watch you closely and then sneak up to see what you are offering. If you know what their favourite food is, they will smell it and sneak up to take it. Don’t be tempted to try & touch them yet.

Put down another bit & wait again. This time when they approach, place your hand close to the food but still refrain from trying to touch them. Let them take the food. They may sniff your hand and even your face. Keep still.

The third time you can try to tickle them. 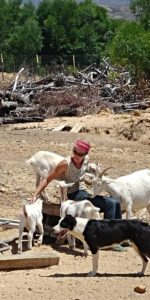 Goats love to be tickled along their backs and up their necks. Once they let you give them a good tickle all over their bodies, you are friends! Not close friends yet, you will need to keep sitting quietly and allowing them to approach you until they learn to trust you.

If you are getting your own goats. Place them in a fairly small enclosure initially. When you feed them, place the food bowl right next to you. Sit and wait. They will soon realise that you are their source of food and if you make no sudden moves, they will quickly learn to trust you. It is tempting to reach out to them, but let them set the pace.

Goats are prey animals and humans are hunters.

If you chase a goat it will go into prey mode and run! Then you will have to start again with befriending them.

Patting a goat is not really a good thing. This is also related to them being prey animals. A pat is a bit like the thump of something attacking. It is best to scritch, scratch, tickle & stroke. They especially like having hard to reach places scratched, such as their necks and between the shoulder blades.

Goats really don’t like their ears being played with. You know that they really, really trust you when they let you fiddle with their ears.

The next time you go to meet a goat, sit down quietly and let them come to you.

It is much better for the goats if you get 2 does & a ram. 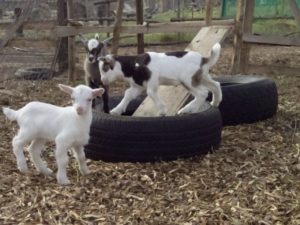 Goats are herd animals. They need the company of other goats. If you get 2 & something happens to one of them, you have an immediate problem. If you start with 3, then you have a less urgent problem. The heartache is the same!

It is also unlikely that you will be able to let your ram stay with the does once they have kidded.

I have never had a ram that has hurt a kid but the does will come back into oestrus within a month of giving birth. They are pregnant for 5 months; they could kid 6 months after giving birth!

That isn’t fair on the goat. 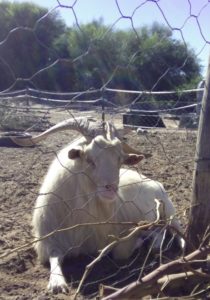 When you separate the ram, you can have him in a camp alongside the does, then he doesn’t get lonely. There is also a good chance that you will have had a least one male from the kids & if he is castrated you can keep him as a companion for the ram.

If you plan to milk your does, you can have them kid at different times. That way you will have a constant supply of milk.

What if I want them as pets?

I still recommend getting three. If something happens to one, then your goats still have a friend.

Rams are not pets. They are smelly & can be dangerous when they go into rut – even if they love you dearly.

Does can be lovely pets, but they do have hormones! Even if you don’t plan to breed them & you don’t have a buck, they can go into oestrus up to once a month & can be VERY loud when they are!

If you want a goat for a pet or milk – then plan to get three!

We are all looking to improve our health. Many of us have realized that what we eat is a very important part of this.

But have you thought about what your food eats? 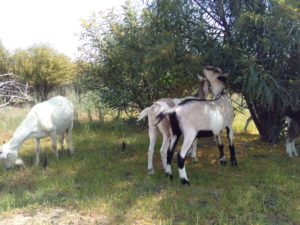 If we eat meat, eggs & dairy products, we are eating what the animal is eating. Has it got all the nutrients it needs? What nasties is it eating that I wouldn’t choose to eat myself?

Grain is easy to grow & store in high quantities as it has a high calorific value. It is relied upon as a feed source across the food industry. For humans and animals.

A lovely article on a study in Canada https://medicine.utoronto.ca/magazine/article/you-are-what-your-food-eats shows the benefits of eating grass raised beef compared to grain-fed. Just looking at Omega 3 & 6 – grass-fed beef has a far healthier balance than grain-fed (& the meat is said to be tastier too!).

This is where my dairy goats come in. In the dairy industry, grain is relied on as a source of high calory feed to keep weight on scrawny dairy goats. They really are a bony bunch! If you look at dairy breed cattle you will see that they too are scrawny compared to their meat-breed family.

When I started with my first few goats, I was feeding them some grain. This was conventional wisdom to keep them healthy. Dairy goats put all their energy into producing milk for their young & for us. While it is fine to be scrawny, you don’t want them to be underweight. That isn’t healthy. I never feed mielies/maize to my animals. About 90% of maize grown in South Africa is GMO.

Over time, I found that I had weaned my goats off all grain & they were looking healthy & happy.

What does this mean to us? The milk produced by a healthy herd is healthy. Because goat milk is so good for us in the first place, why not get the healthiest version possible?

What our goat herd does get to do is free-range across about 200 hectares of land. There is a range of vegetation types including Sand Fynbos, wetlands & the highly invasive Port Jackson (Acacia Saligna). It is fascinating to watch them targeting certain areas & different plant types at different times. 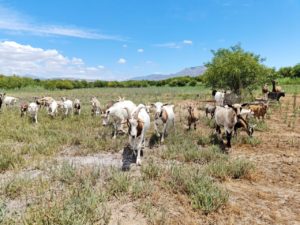 Our milking girls get lucerne pellets & a variety of fruit & veg each morning on the milking stand. They also get sunflower seeds which are very high in selenium that is so important to goats – & humans! All GMO-free!

Next time you buy meat, eggs & dairy products – ask yourself

Do I know what my food eats?

Do I want to eat that?

Living on the banks of the Breede River just outside Robertson